If you could bottle happiness, drink enough of it to get drunk, it still wouldn’t be enough to fully comprehend the amount of joy that filled my soul after the final credits rolled for... 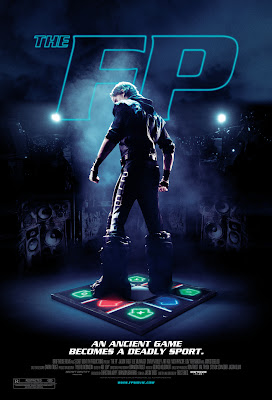 The FP is at it’s core a movie about redemption, betrayal, rising above oneself, and beating off. Wrapped around that is a layer of self worth, drugs, gangs, tampons, and…

Dance Dance Revolution.
OH YEAH BABY! This is the movie we’ve been waiting for. So far 2012 has been kicking me square in the testicles with all of its WIN and I don’t know how much more I can take! (But for the love of all that is bad, DON’T FUCKING STOP!)

I’m betting that you’ve got some questions. Allow me to answer them for you.

WHAT IN THE LORDS NAME IN VAIN IS GOING ON!?

This movie is set in a rural dystopian future. There are rival gangs (The 248 and the 245s) who fight for control of The FP (Frazier Park). They do so not by guns or bloodshed but by dance fights with the video game Beat Beat Revelation! (or as we all know it as Dance Dance Revolution. But Beat Beat leads to some pretty hilarious lines later so I’m ok with the name change) The main guy JTRO loses his brother at one of the contests and vowes to never Beat off again! Until a year goes by and The FP is a shithole. JTRO then returns to win The FP back and have glorious victory sex with the woman of his dreams!

WHY WOULD SOMEONE MAKE THIS MOVIE!?

Because its FUCKING AWESOME. That’s why.

WHO WOULD WATCH THIS MOVIE!?

I would. And everyone reading this review would. This movie has no secrets. It doesn’t pretend to be anything other than over the top ridiculous. Why would you think anything otherwise? This movie works because it’s a bad movie on purpose but the characters in this movie play their world completely straight. This is the way they live and this is how things are done. To us it’s fucking amazing and funny as shit but to them…it’s another day in The FP.

PEOPLE PAID MONEY TO GET THIS MADE!?

Twice. There was a short movie first and that was turned into the feature length film. The Trost family is responsible for this masterpiece. If you look at the credits you’ll find at least 4 Trost’s amongst the credits. Directing/Acting/Costumes, they do it all.

YOU SAW THIS IN A THEATRE!? HOW IS THIS EVEN POSSIBLE!?

It hit a lot of Independent theatres. You probably won’t find this at an AMC anywhere. It’s just too amazing. While all you other pussies went out and saw The Hunger Games, me and about 20 other dudes sat in a small theatre and laughed our faces off. Once it was over, I stood up and demanded they start it over. Or to more accurately quote myself, “Rewind this motherfucker!” And it is all made possible by drafthouse films. Have you ever heard of the Alamo Drafthouse? They’re a pretty large independent theatre chain. I really want to visit one, they are supposed to be just the most amazing thing ever. Well, I guess they’re making movies now. And god bless ‘em.

A little. Do I care? Absolutely not. I’d rather watch something like this, a movie filled with more originality and creative genius then plug away at another remake/reboot/based off a comic/book/Michael Bay enduced piece of shit. In fact, I’m almost willing to go the distance and give this movie another $50 so I can get a signed TAMPON with my bluray!

THERE'S A LOT OF MIXED REVIEWS, IS IT WORTH SEEING!?

People who speak negatively about this movie are assholes. And idiots. What in the hell were they expecting!? Just browsing over the IMDb Forums shows people calling this stupid and ridiculous. (Two reasons why I watched this movie: FACT) After watching the trailer, what in the hell do you think this movie is going to be about!? It's all laid out there right in the trailer. You KNOW immediately if this is something you're going to like or not. They aren't hiding behind some kind of fancy editing or anything. This movie is all about redemption and Dance Dance Revolution. And overthetop dialogue.

I'M OFFENDED EASILY, SHOULD I STILL SEE IT!?

Any other questions? I thought not. Go see The FP while you still can. It’s playing for a short while yet at a couple places. (Check out the Drafthouse link above for theatres) It should be out on DVD/Bluray soon for your viewing pleasure.

Email ThisBlogThis!Share to TwitterShare to FacebookShare to Pinterest
Labels: Awesome, The FP