Mr. Gable’s Reality. Morbidementia. She Blogged By Night. Vincent’s Handmade Art. Guts and Grog Reviews. 365 Horror Movie. Mrs. Gable.
WE’RE BACK BABY!!
FOR
THE
Mega Awesome Ultra Crazy Always Amazing
NETFLIX INSTANT BAD MOVIE MARATHON!
(Part 2: Texas Blood Money)
Saturday July 16th, 2011 starting at 8:30e/7:30c/6:30m/5:30p
A History of Texas Blood Money
Why the tagline Texas Blood Money? This all boils down to one man…my friend CG. Once upon a time we were ripping on movies and it was decided that all part 2’s need to have the tagline Texas Blood Money. Why? Because it’s fucking awesome, that’s why. So to this day I continue the TBM tradition with every part 2 that I do. Why? Because it’s fucking awesome.
What is the Netflix Instant Bad Movie Marathon?
Over a month ago we had our first ever Bad Movie Night on Twitter. We chose 3 movies available on Netflix Instant that we deemed bad enough to be awesome. Then we watched them and ripped on them MST3K style via Twitter. Also, we drank pretty heavily and misspelled words constantly. But we had so much fun that we’re doing it AGAIN! Last time we were able to rope in a few people into doing this with us, let’s try to get a few more!
What can you do?
JOIN US! Get on Twitter, Fire up your Netflix Instant machines (if you’re watching on your computer you’ll have to download a plugin FYI), find a comfortable spot and rip these movies to shreds with us! Why? BECAUSE THEY DESERVE IT! Just be sure to post your Twitter handles in the comments section or seek us out on Twitter and let us know you’re in on the fun. (On Twitter you can add people to a list, that way you don’t have to follow on your regular newsfeed, you can just pick it up on the list. Also, we will be using the hashtag #badnetflix. It worked really well last time and anyone that sees our posts will be able to pull up that hashtag and see what everyone else is doing as well!
But let's say you are a Twitter Hater. You find the thought of Twitter repulsive. Then PLEASE do this through any other means you think you can reach people worldwide! Have an active blog, update via facebook, throw a party on xbox, Skype it! Whatever you want to do, just whatever you do PLEASE let us know so we can follow along! And also keep locked onto our Twitter feeds to keep up to the minute with the world’s greatest bad movie commentary! (MST3K aside of course.)
By all means, make it your own. Maybe doodle pictures while you’re watching it, record yourself hating yourself for watching these movies, whatever you want to do!
Where can you find us?
Mr. Gable - @mrgablesreality
Mrs. Gable - @MrsGable1
Tromeric (Guts and Grog Reviews) - @Tromeric
Vincent’s Handmade Art - @vinstem
Scary Larry (Morbidementia) - @morbidementia
Stacia (She Blogged By Night) - @glitterninja
365 Horror Movie - @365HorrorMovie
What are we watching? 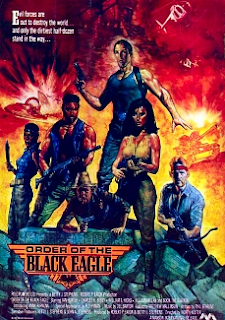 The Order of the Black Eagle
1987 - 93 minutes - Rated R
Directed by Worth Keeter (Director of A LOT of Power Ranger episodes)
IMDb Rating: 3.5/10 stars
Synopsis: In this outlandish spy-film send-up, James Bond wannabe Duncan Jax (Ian Hunter) and his tank-driving baboon infiltrate a South American lair where a group of Nazis scheme to revive a cryogenically frozen Adolf Hitler. Armed with high-tech gadgets and joined by sizzling hot lady agents, Jax turns his mission into a wildly explosive crusade against the fascist baddies. Worth Keeter directs this over-the-top action flick.
NOTES: There is NOTHING to hate about that synopsis. 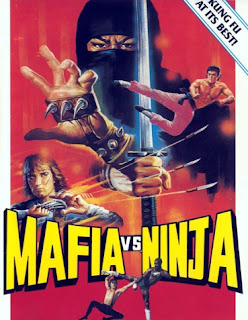 Mafia vs Ninja
1985 - 91 minutes - Not Rated
Directed by Robert Tai (Director of A LOT of Kung Fu movies)
IMDb Rating: 6.0/10 stars
Synopsis: Mafia hit men and Shanghai's fiercest ninjas mix it up in this action-packed martial arts film. After refusing to pay protection money to a violent group of gangsters, buddies Jack Do and Charlie Woo join an opposing mafia gang. When their boss, Mr. Chung, is killed by the rival gang, Jack and Charlie vow revenge and find themselves in an all-out war against ninjas and mercenaries. Alexander Lou and Silvio Azzolini star.
NOTES: This is the main event right here. I've watched about 30 seconds of it and had to shut if off because my face hurt from smiling. THIS IS GOING TO BE AWESOME. 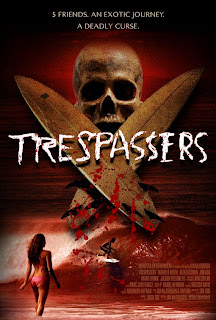 Trespassers
2005 - 82 minutes - Not Rated
Directed by Ian McCrudden (Director of NOTHING.)
IMDb Rating: 4.0/10 stars
Synopsis: Looking to ride some killer waves and party hearty, Colin (Kaiwi Lyman) and his surfing buddies head for a secluded beach south of the border. But when the teens take a back-roads shortcut, they get hopelessly lost and end up at an abandoned campsite strewn with carnage. The hapless vacationers soon discover that they've stumbled onto evil terrain in this fast-paced horror flick directed by Ian McCrudden.
NOTES: Finally, some fucking TITS! That's the only reason its here. That and it's a perfect movie to NOT pay attention to after 3 and a half hours of drinking.

Trespassers - 82 min - 12:10e(am)/11:10c/10:10m/9:10p
Last words
Thank you to all who participated in last month's Netflix Instant Bad Movie Marathon and thank you to all of you that will be participating this time! We are thinking about doing this once a month (our schedules permitting) because it's just so cool to not only watch these movies and make fun of them but to watch movies with people who live IN ANOTHER PART OF THE WORLD.