Sanity - Gable, you gotta quit doing this to me. These "naps" you call a good nights sleep are just not good enough to sustain me. I need more.

Gable - Fuck you, Vincent Price is on.

Sanity - Gable, I don't think you understand the gravity of the situation. I am you and you are me. If I go, you go. So please, please shut off the movie and go back to bed.

Sanity - Umm...I don't know who October is but I'm your Sanity.

Gable - This is a trick. I'm getting an axe.

Sanity - You don't have an axe.

Sanity - Put the knife down.

Gable - All you had to do is just stay out of my way. Keep your mouth shut. You just couldn't do it could you?

Sanity - Gable please, listen to yourself. This has gone way too far. End this, save us BOTH.

Gable - You know what I want to save?

Gable - Enough of you to last until Halloween.

Sanity - Gable, no. You don't understand. NO GABLE! NO PUT IT DOWN EEEEEYYYYAAAARRRRGGGGHHHH

Gable - HAHAHAHAHA I learned this move from Michael Myers.

Gable - Good. Now go bleed out in the corner so I can finish this movie. 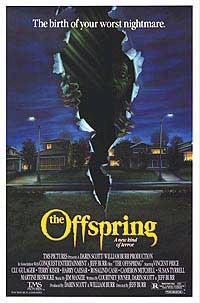 "Dumpster Baby has returned to kill you Clu Galager!"
OH SHIT IT'S THE OFFSPRING! I love that band!

Actually, the band has more to do with this poster art than this movie does. There really isn't any Offspring in this movie. It's just Vincent Price going on and on about his haunted house and all the evil things that have spawned from it.

What The Offspring IS, is an anthology movie. There are 4 spooky stories told around one wraparound story...told by Vincent Price. Fuck that's awesome. And it's fitting too because I know Price has done other anthology movies before and it's just poetic that he's doing it now in his later years.

I'll go ahead and talk about each story first that way you can get a feel for what's going on.

In the first segment, Clu Galager plays a nerdy looking dude who lives with and cares for his sister. He has the hots for this one chick but she just has absolutely no respect for him. After a series of unfortunate events, he ends up killing her. And then he kills his sister...and her unborn zombie child (whom is obviously incestual) escapes her womb and kills Clu.

The second story is about a white dude and an old black dude out in the bayou. The white dudes a good for nothing street punk and through the story he discovers that the black dude is MUCH older than he seems. Hundreds of years old. He oversees him drinking some potion and wants some for himself. After he tries to kill the black guy, the black guy returns from the swamp gives him what he has coming to him: 70 years of a painful existence.

The third story takes place at a carnival. All of the freaks are ACTUAL freaks spawned by a voodoo priestess. So the main guy eats glass and metal...because the voodoo bitch cursed him to do so. One guy has an eye on his chest. It's pretty fucking sweet.

The fourth story is about a group of dudes in the civil war. They are good/bad guys. What I mean is that they fight for the war but they care nothing for the rules of war. Do you want to surrender? They don't care, they will shoot you anyways. Well, they get what they have coming to them when they meet up with a group of murderous little kids and their leader the magistrate.

The wraparound story revolves around a woman put to death. That woman's sister is a reporter and trying to figure out what the hell she did. She ends up at Vincent Price's house and he tells these tales of woe all spawning from the very house/town that he lives in.

I liked this movie even though it's pretty bland. The stories would make fairly decent tv episodes. They aren't anything spectacular or mind blowing. They are a fun little romp for the Halloween season though. I would suggest watching this and Trick r Treat back to back. That would get you into the Halloween spirit no doubt.

When you strip it all away and get down to it, it's a fairly decent horror movie(s) with Vincent Price. You know you need to see this. (Originally titled From a Whisper to a Scream, which is available on Netflix Instant under that name.)

Email ThisBlogThis!Share to TwitterShare to FacebookShare to Pinterest
Labels: The 31 Baddest Days of Halloween, The Offspring