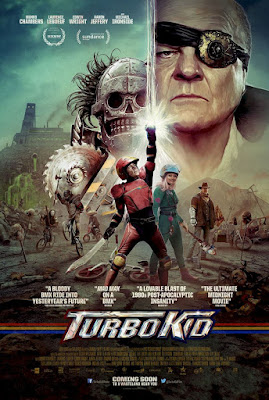 Let's assume for a moment your name is Brad (or Lorraine if you're a woman). Now you're a 28 year old up and coming dentist's assistant. You've broken the mold and you're making some pretty good money and this year you decide to take a trip to Africa. You've had a great time in Africa but on your 3rd day visiting you come across a group of drug smugglers. They notice you, chase you down, and decapitate you. It's moments after they leave that a lonely, overweight, and deeply sexual baboon happens across your rotting corpse. He looks to the left, then to the right. With no ape in sight, he proceeds to fuck your eye socket.

That complete and unending joy that baboon feels skullfucking your imaginary rotting corpse is precisely the same amount of joy you get watching Turbo Kid.


THIS MOVIE IS AMAZING! It's everything I needed in my life. It's got freakin' lasers and robots and people exploding. It's just the best. I haven't been this excited for a theatrically released bad movie since The FP!

I'll do my best to give you a short, sweet, and spoiler free review.

Turbo Kid is the story of a young man in the post-apocalyptic wasteland of 1997. The world's gone to shit and the only thing left to do is hole up in the ground and read comic books...his favorite being Turbo Rider. Soon he befriends an overly excited woman named Apple. (Seriously, everything is amazing to her. At one point she is kidnapped and forced to fight gladiator style and she couldn't be more excited). 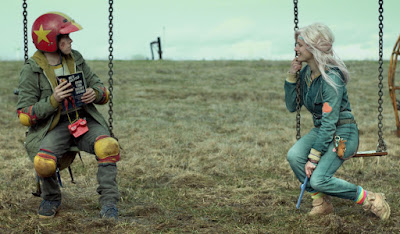 The story unfolds with Turbo Kid donning the Turbo suit and going on an exploding body killing spree to get back the girl. Along the way there's an Indiana Jones guy with an Army of Darkness hand, robots, a mute guy with a metal skull mask and an arm that shoots skilsaw blades, 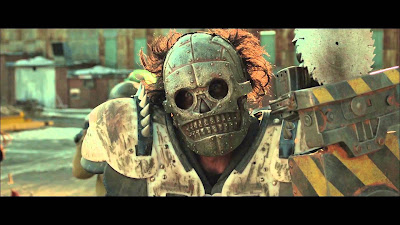 a Little Trouble in Little China dude with projectile chain fists, and last but not least: Michael Ironside. 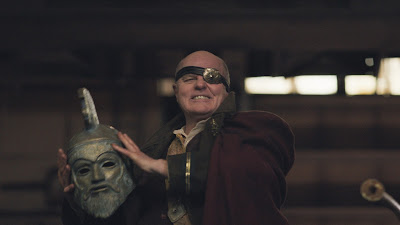 Let's talk about Michael Ironside. It was almost 5 years ago now that me and my friends coined the term Ironsided. (click here to view) Whenever Michael Ironside kills someone, they just got Ironsided. And boy is the Ironsiding in this movie great. It may not always be as a direct result of Ironside himself because the man is getting old and he has to do his Ironsiding through people but that's ok, it's still fucking amazing. People get shot, stabbed in the face, cut in half, stabbed in the face again, and all around good time.

The acting is pretty good. I can't really complain. 90% of the movies reviewed on this blog are about the same or infinitely worse. The actors do have a lot of fun with it and it's obvious at times where the inspiration is coming from (such as Temple of Doom) and it makes for good entertainment.

Media lately has been flooded with a lot of tribute films/games that attempt to mimic 70's/80's movies. Stuff like Kung Fury, The FP, or Farcry 3: Blooddragon are a couple that come to mind. This is one of the better additions in my opinion. (It'd make a good double feature with Hobo with a Shotgun) There's a lot of inspiration and inside jokes hidden throughout but it keeps itself grounded in its own reality and story and that's why I think it succeeds over the others that just try to throw the 80's in your face.

One of the best parts of this movie is the full on Synth Keyboard soundtrack. You can hear some of it in the trailer and the entire movie is filled with that sweet beautiful music. It knows when to crank up and get exciting and it knows when to tell you that you should be sad. It's the soundtrack that makes sweet sweet love to your temple holes.

It's a fun movie. It's extremely entertaining. I'll warn you that the first half of the movie is spent mostly establishing characters but I feel that it was done in such a way as to not be boring whatsoever. They sprinkle in just enough killing and craziness to keep it moving which I think makes the final battle all that much better. Also there's no nudity. Sure that would've made this movie better but I'll take the exploding bodies and be happy about it.

Go see it if you can. It will probably be in theaters for a few more days. If not, hopefully the bluray won't be far behind. 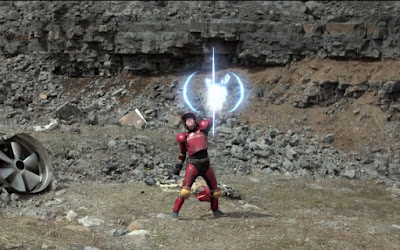 It just makes you moist thinking about it doesn't it?
Posted by Mr. Gable at 5:48 PM