Have you ever wanted to watch Doc Brown snort coke, fondle hookers, and sew a man's mouth shut? Then 88 is the movie for you! 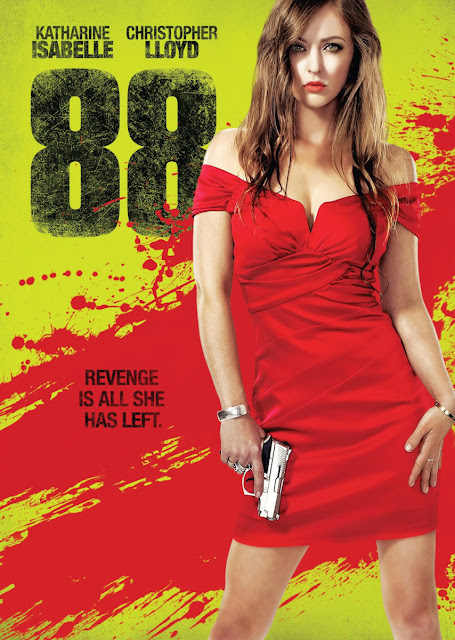 Synopsis: A young woman comes to in a roadside diner with no idea where she is or how she got there. Split between two timelines, she gets taken on a violent journey as she seeks out the person responsible for her lover's death.


Let me tell you a tale my friends....about the first time I ever entered a woman. (It was about 30 seconds...impressive right?) It was with a woman who had a love for the movie Ginger Snaps 2. Yes...the second one. We watched it together and I liked it so I sought out the other 2 movies. After sitting through the full trilogy I developed a bit of a crush on the main star of those movies: Katharine Isabelle.

That crush lasts to this day. She's great! She's gorgeous, she's a great lead, and her acting just gets better and better as time goes on. You might recognize her as the drunk shower girl in Freddy vs Jason or if you by chance watched the Ginger Snaps movies. Lately she's been taking lead roles in some low budget movies...

Oh, this fucking guy's eye is just so amazing!

At this point, I have to wonder if there's a low budget movie making school somewhere that everybody that's never made a movie before goes to. There's got to be one instructor there, who I'll dub Professor Flashback. Mr. Flashback must teach all his students that to make an artsy low budget movie you must include no less than 600 flashback sequences. Because....art.

This movie unfortunately is a product of Professor Flashback. The overall story bounces around on 2 seperate timelines that ultimately end up to the conclusion. To make sure the audience knows which timeline they're in, they repeat the last 20 seconds of the previous timelines ending...that we just watched 5 minutes ago. This movie suffers a lot of back and forth and a lot of repeating of things. You see a lot of the same scenes twice, you hear a lot of dialogue over and over, but you know what? It kind of works in this movie.

Dis my Werewolf pose...still got it!

The flashbacks kind of work for this movie all because of Katharine Isabelle's ability to pull of a Batman type of personality. The different timelines are different persona's of Isabelle's character Gwen. Gwen had something horrifyingly tragic happen to her and has since then buried all memories of said event in her mind. Her different persona's try to figure things out which ultimately leads up to the ending. 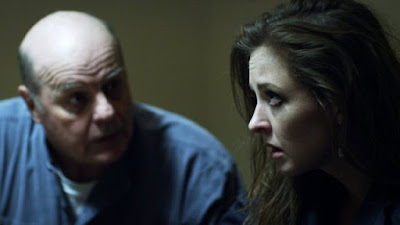 Oh, and Michael Ironside is in this movie!

This movie had the balls to try and kill Michael Ironside. The nerve! You can't do that and this movie knows it. One scene Ironside is getting blown away and the next....he's walking around with NO EXPLANATION.

But we all know....Ironside only dishes the death, he doesn't take it. 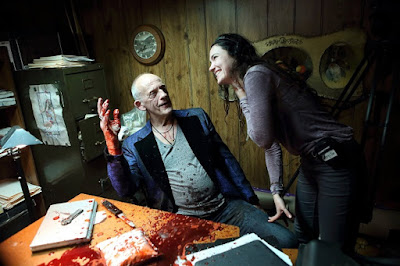 I just stabbed a man in the neck, Marty! I'm the evil Doc Brown from an alternative timeline!

It's really hard to see Christopher Lloyd as anything other than Doc Brown. He's snorting coke, banging hookers, cutting throats, shooting people, throwing down F-bombs as needed....but all I see is Doc Brown. Even so...it's still cool seeing Christopher Lloyd in a bad guy role. You don't see that too often. 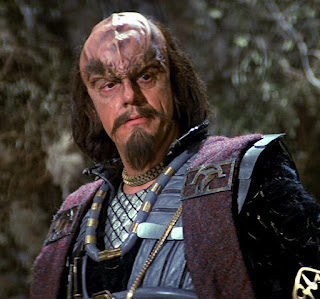 I still liked him as the bad guy. It kind of works in a weird way. He's just playing old man creepy pants and it fits.

As for Katharine Isabelle, she was fantastic. I can definitely see a change in her acting ability from this movie compared back to Ginger Snaps. She was never really terrible but she really pulled this movie together. In one scene she's casually walking into a convenience store, hiking up her skirt and pissing all over the floor...and the next she's running around, crying that people are dying around her. I'm glad to see that she obviously has a strong work ethic and is doing what she can to be the best at what she's doing. 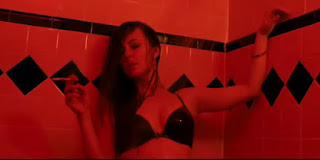 I don't give a fuck...no one can touch this.

Oh god, this man's been shot, someone call the cops!

Despite the flashbacks, this movie has many moments of greatness. The aforementioned convenience store piss, then there's this time they go buy guns and they are raided by the police. This woman grabs a tiny shield, declares it was blessed by the pope and is IMMEDIATELY shot in the throat. HAHAHAHA!!! Worth it.

88 isn't just the movie title.. It's also the running time. Which is great, because these types of movies need to stay right about that 80-90 minute run time. Any longer and we're looking for the razor to slit our wrists. Good job 88....be the example.

I have absolutely no choice but to recommend this movie. It's worth at least one watch, especially if your an Isabelle fan...or want to see an evil Doc Brown. It's a pretty interesting story that bounces around a lot. If you're not paying super close attention you might get lost but...you know...just pay attention. Isabelle is great, Lloyd is great, Ironside is great....and lots of people die. What else do you need?