Evil Bong 3 getting a theatrical release! Plus other stuff... 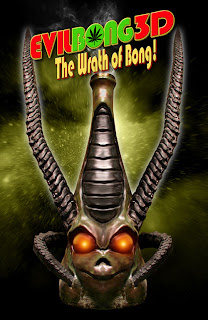 It just never stops with the Charles Band around here does it? I was gonna let it go for the rest of the week but this is just too big to hold onto. Charles Band's Evil Bong 3: The Wrath of Bong is coming to theatres! On 4/20/11! (hehehe get it? 4:20? fucking Dave's not here man!) This is huge news because its probably been a decade since they've put a film into theatres.

And not ONLY is there a theatrical release but there's going to be lots of audience participation as well. First, its in 3D, a technology Mr. Band probably pioneered...or at least is familiar with. I know we're all getting sick of 3D...but this is Evil Bong 3D. That is ok. And in addition to 3D, there's going to be Smell-o-vision. So when you go to the theatre you'll get a little scratch and sniff card that you'll be able to smell as the movie plays. All kinds of CRAZY SHIT! WWWOOOO!!!

Who knew Evil Bong would go this far. That's pretty awesome. And did you know that we Full Moon fans helped to make this possible? It was about 6 months ago when Mr. Band requested titles and ideas for a new Evil Bong movie. Anybody could pitch anything. The top 20 were pulled together and we all got to vote on the best one. Wrath of Bong was that winner. Here were some of my ideas...

And of all of those, none of them were chosen for the top 20. Come on man! XMAS BONG!

FROM THE PRESS RELEASE:


Charles Band is proud to announce the Full Moon 3-D theatrical presentation of “EVIL BONG
3-D: THE WRATH OF BONG”, the latest entry in his smash hit stoner “EVIL BONG” series. The theatrical release of “EVIL BONG 3-D: THE WRATH OF BONG” will be presented in 3-D and “Sniff-O-Rama”.
Charles Band, the Chairman and Founder of Full Moon Features was a leading force in the 1980’s rebirth of 3-D. Charles knows what the audience wants out of 3-D, having directed the 3-D features “PARASITE” starring Demi Moore (1982) and “METALSTORM: THE DESTRUCTION OF JARED-SYN” (1983).
Charles Band says…”Audiences go to 3-D movies for one reason; to have things thrown at them, to be thrilled, to duck and to reach out to touch things, and we’re not going to let them down”. “EVIL BONG 3-D: THE WRATH OF BONG” will feature “the record amount of naked alien beauties, boobies, and reefer hits to ever be presented in 3-D”.
In “EVIL BONG 3-D: THE WRATH OF BONG” an evil alien bong crashes on earth. Its intent; world domination. Our stoner heroes are transported to the alien bong home world and held captive by nude alien beauties. Their only hope to escape and save planet earth; EBee, the original Evil Bong.  The original whacked out cast of stoners from EVIL BONG 1 + 2 returns.
“EVIL BONG 3-D: THE WRATH OF BONG” will utilize classic showmanship techniques including 3-D glasses and scratch and sniff cards. This will be a wild and crazy “THE ROCKY PICTURE SHOW” like experience with audience participation.
Charles Band will visit select cities in person and present a live stage show before showings of “EVIL BONG 3-D: THE WRATH OF BONG”.  These special roadshow events will feature celebrity appearances, contests, audience participation, and collectables for sale in the lobby.
“EVIL BONG 3-D: THE WRATH OF BONG” will be released on National Pot day April 20, 2011. Advance screenings will be held in select cities.
ABOUT CHARLES BAND
Charles Band has sustained a remarkable track record as an industry pioneer over the past thirty years, With 300 feature films under his belt, the Chairman and Founder of Full Moon Pictures shows no signs of slowing down.
In 1977, when no one in the industry shared his vision that home video was “the shape of things to come”, Band founded Media Home Entertainment, a company that became one of the original independent video distribution operations in America. His foresight and unwavering commitment to this marketplace helped pave the way for the colossal home video boom to come. In 1989 Charles Band pioneered the direct to video feature with the formation of Full Moon Entertainment and the creation of the Puppetmaster series which is the most successful direct-to-video film series of all time.

Oh fuck yeah. Naked alien chicks. And Evil Bongs. This movie is gonna rule!
Posted by Mr. Gable at 7:45 AM