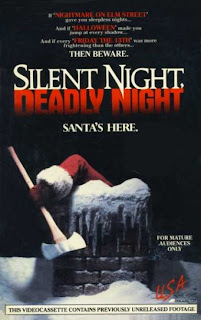 That’s Silent Night, Deadly Night baby! (now to be referred to as SNDN)

SNDN fucking hates Christmas. Whoever made this movie probably does too. The whole point of this movie is to take cherished aspects of Christmas and completely punish them with every conceivable over the top act possible.

That’s the central theme of this movie. PUNISH, MUST PUNISH! There ain’t to “Sleigh Bells are you listenin?” here. Fuck that shit, I want to see a topless Linnea Quigley getting impaled on a set of antlers. 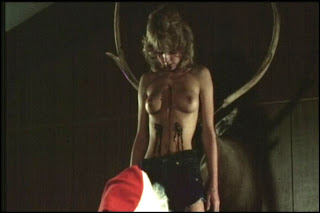 I just saved you a hour and a half of your life.
And there’s a lot of Nunsploitation going on in this movie too. I think whoever made this movie must have been an orphan at one point or another. SNDN hates nuns. There’s some nun getting their ass kicked for having gratuitously naked sex. That’s awesome.

SNDN is basically about this guy that witnessed his parents getting brutally murdered by some guy in a Santa suit as a child. That was right after his insane Grandpa told him that Santa likes to punish people who haven’t been nice ALL YEAR. “Christmas Eve is the scariest day of the whole year!” So this kid has some Santa issues. He grows up and gets a job at a toy store. (Uh, Oh.) Santa calls in sick so said guy has to play the part…and he snaps. From there the movie is just one kick ass murder after another. The cops really don’t catch on until the one hour mark and shortly after the movie comes to an end. The greatest ending ever.

“You’ve been naughty.” (That's all I'll say on the matter)

You know, it’s been a few years since I’ve visited Silent Night, Deadly Night. I really enjoyed this one a lot more this time around than I did the previous times. Maybe I’m just desensitized to it or my standards for cinema are at an all-time low but I really liked it. The movie set out to be as offensive and balls out insane as possible and it did that exceptionally. I mean, what better way to be offensive then to punch Christmas in the face. It doesn’t get much worse than that. Except for maybe Santa rapin some bitches…which this movie does.

Definitely add SNDN to your yearly holiday bad movie cycle. It’s worth the watch. Very nostalgic over the top 80’s slasher in the vein of Friday the 13th or My Bloody Valentine. Except the killer doesn’t hide from the camera like a pussy, Santa wants his fucking presence known!

As for the sequels…we will see. I’ve never seen them…but as a holiday treat to myself I will this year. I got Part 2 on VHS (or as my friends call it, Part 1.5), and Parts 3-5 together on one DVD set. So we will see just how terrible this franchise is. I’ve heard just awful, awful, heartwrenching, painful things about the sequels.