The 31 Baddest Days of Halloween 2011: COUNTDOWN TO INSANITY!!

October is on the horizon so that only means one thing: It’s time for the 31 Baddest Days of Halloween!


You'll hit play and continue reading if you know what's good for ya.
31 Days of Batshit Insanity, 31 Days of Unadulterated Badness, 31 Days of Movies you really want nothing to do with! RIGHT HERE, FOR THE ENTIRE MONTH OF OCTOBER! Brought to you by none other than myself: Mr. Gable.

Let’s do this thing.

Last year I counted down the 31 greatest films of Charles Band and this year I have something truly special locked, cocked, and ready to unload.

Creating a countdown isn’t just a fly-by-the-seat-of-your-britches type of operation. (at least not for me) This is truly THEE main event of any horror blogger. After last years event, I let my mind wander and wander trying to come up with something really great to follow up last years list. I thought about the 31 Days of Roger Corman, I thought about 31 Days of Shitty Horror Sequels, but I kept falling back on one thing: I haven’t seen them all. At least not enough to take pride in a 31 day countdown. Then it hit me:

I like to up myself. I like to do something and then the next time I do it, take it to the next level. This year isn’t so much a countdown of particular films but a countdown of myself. Endurance is the name of the game. This year WILL BE the 31 Baddest Days for Mr. Gable. I have a list so rancid, TerrorVision would have a tough time stomaching it. This year is: 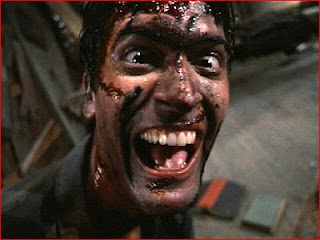 The 31 Baddest Days of Halloween 2011
COUNTDOWN TO INSANITY!
That’s right, 31 days of the absolute WORST horror movies ever made. Some of it name brand, most of it absolute shit. You see, I like to acquire movies. A lot of movies. So much so that I have a wall of over 200 movies that I have bought and never watched. It’s a bit overwhelming to look at and this October I’m going to put a dent in it. I ALSO have a long list of crap that’s been sitting in my Netflix Instant queue FOREVER and they need to get the hell out of there. SO…that being said: here’s what’s going on:

I’m going to get up EVERY morning at 5am sharp CST. (I picked 5am because it’s the only time I have consistently available AND it adds to the endurance of it all) I’m going to be in the Gable Cave shortly after 5 with a cup-o-coffee in one hand and a really shitty movie in the other. I will announce via Twitter which Endura-Flick I have lined up and proceed to suffer through it ALSO via Twitter. So think Bad Netflix but at a time nobody will be watching. The reason I do this is so that YOU know I’m not fucking around. There’ll be time stamped proof. You’ll know this is actually happening everyday, right away, no exceptions. (this will be KEY for tomorrow’s post)


BUT WAIT! YOU GET TO HELP TORTURE ME!
MONDAY – THURSDAY I will choose a movie out at random. (Reason being: I have well over 31 movies picked out and I don’t feel like widdling it down. Besides: It’ll be a “fun” surprise for all of us. In preparation, I’ve written down all the titles at my disposal and put them into a giant bowl, from this moment forward to be called: The Big Blue Bowl of Destiny, and I will let the bowl decide my fate.) 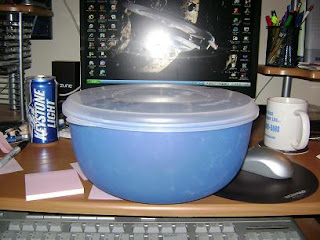 BEHOLD THE GLORY OF THE BIG BLUE BOWL OF DESTINY!
FRIDAY is reader’s choice. Starting sometime Saturday or Sunday I will post 5 movies off to the right of this blog -----> and you will get to vote on which one you want to see me tortured with. These movies will be picked on the sheer amount of endurance needed to survive them. They will be the baddest of the bad. It’s going to be epic.

SATURDAY I will be playing a little game I like to call Bad Movie Roulette. I will put together 5 movies on a roulette wheel (or more likely on the floor) and give it a spin. I’m going to be filming the roulette wheel so you know I’m not cheating and you’ll also get to enjoy the brutahlity.

SUNDAY is Gable’s pick. There are a handful of movies that have just been sitting there SO LONG that I keep ignoring and now they are getting their 90 minutes of fame. OH GOD HELP ME!!

HALLOWEEN MONDAY will be something special. You can view it as an extension of Gable’s Pick Sunday but Halloween Monday will be a special pick. Why? Because it's fucking Halloween. Halloween will showcase a cult movie so bad that even I haven’t been able to survive it....yet. I’ve tried twice (once sober and once drunk) and I just can’t get through it. Not this time. The power of Halloween will get me through!

(Also, all movies not chosen during the Friday vote or the Saturday Roulette will be automatically entered into the Big Blue Bowl of Destiny. There's no escaping them)


BUT WAIT, THERE’S MORE!
Each daily post will work like a survival log. There’ll be a mini review and perhaps some notable quotes from Twitter. There will be an Insanity Meter included with each daily post. Stop by everyday to see what I’ve punished myself with and just how insane I am. I’m not sure of what the scale will be yet but I can assure you that it won’t be pretty.

Also, above the voter to the right I will include a kill counter. I’ve set a personal goal of 500 deaths in 31 days. Is that even possible? Maybe, if you take into effect the following:

There’s this nifty facebook game that’s going to be played during the month of October appropriately called THE MADNESS. Basically you get points for watching movies and you get bonus points if the movie you’re watching meets certain criteria (I.E. a part 4 or higher/gratuitious nudity). This years theme is SLASHER HORROR. You get more points for Slasher movies. SO…on top of the 31 day countdown, I will ALSO be playing the mega horror movie watching game. (You’ll see weekly posts showcasing the movies I’ve watched for that week and explanations for points earned) I will be counting these movies WITH the total kill count for the month.

And just today over and Krell Laboratories they announced the 31 Day October challenge which is exactly what I'm doing here. Add in a Mega-Amazing Bad Netflix Party (to be announced) AND my annual Halloween Horrorthon and we got ourselves one hell of an October!

So sit down and keep your internet dials tuned to Mr. Gable’s Reality the entire month of October as I countdown 31 of the most enduring Horror Movies of all time and follow along as I take a dive into darkness.


THE 31 BADDEST DAYS OF HALLOWEEN!

Email ThisBlogThis!Share to TwitterShare to FacebookShare to Pinterest
Labels: The 31 Baddest Days of Halloween