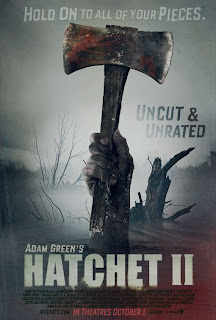 Adam Green, you magnificent bastard. You’ve done it again. Who’s Adam Green you may ask? Get the fuck out of here. You aren’t allowed to read my blog until you watch some Adam Green. (just click that link, that’s good enough)
Hatchet II. The only place you get to see gratuitous nudity, violence, a gas power belt sander, a six foot chainsaw that gives an all new meaning to “two birds with one stone”, and crotch Hatchet. (It’s just as amazing as it sounds.)
Adam Green is a writer/director that I really believe needs better exposure. Some people are vaguely aware of him but its just shocking how unfamiliar some people are with him. I think he’s awesome. And with films like Spiral under his belt, he proves that he isn’t just a master of splatter and slashing but of suspense and psycho-horror as well.
Hatchet II would be the former of course. The original Hatchet (and this sequel) is a homage to 80’s slasher movies. It uses the same formula while being as absolutely ridiculous and over the top with its kills as possible. Hatchet’s main bad guy is Victor Crowley. A horribly disformed backwoods baby that was murdered but (somehow) came back to kill anyone that sets foot in his swamp. And of course, nobody heeds the warnings of the townspeople and they go in on a midnight swamp tour.
Fuck yeah, this is awesome.
But the sequel takes it a little further. It ends at the same moment the first one left off. And it also does something that a lot of 80’s slasher sequels did as well (and I have no idea if this was intentional or not but), they kept the main character but replaced the actress. (You see this a lot with A Nightmare on Elm Street and Friday the 13th) And a better actress in my opinion, Danielle Harris. She’s awesome. And she’s got the slasher experience behind her so she does a wonderful job in this movie. 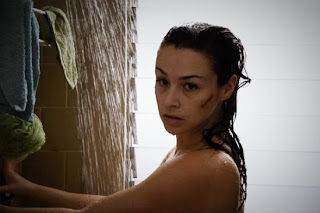 And she's got a shower scene. (No nudity though.)
But anyway, the woman escapes Victor and returns to town. She revists the man (Tony Todd bitches) that sent them on the boat tour (kinda) and he agrees to help her kill him (and also to bring back her dead family’s bodies). So they gather up a bunch of expendables and venture off into the swamp again…where everyone proceeds to die horribly and awesomely.
Thank you Mr. Green. You fucking get it. It's like your in my brain and making movies that I want to see so badly. Thank you.
The story was a bit slow at first. It starts out pretty fast…then slows to a crawl for 30 minutes. It really isn’t until the last 40 minutes that anything awesome starts happening. But unlike a lot of movies…the payoff is so worth the wait.
Six foot chainsaw anyone?
Posted by Mr. Gable at 7:44 AM