A quick word with Mark Terry: producer of Live Evil 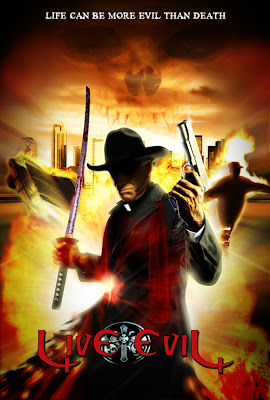 So I signed into my facebook the other day and some dude named Mark Terry "liked" my page and sent me a quick note. Well I won't be damned if that isn't the producer of Live Evil! He saw my review during Trancers Week and liked it! How awesome is that? Below is our conversation:

Mark Terry: Mr. Gabe thanks for checking out Live Evil and your great blog. I can see you really got the film. Upon securing the script option I knew if I was able to hire Jay I could get TT [Tim Thomerson], the movie would come together in a fun way. I took my background in stunts and pulled a lot of favors to get the car stuff we did. Over all it was a memorable three years of my life. -MT

Mr. Gable: Your welcome, I first saw it on Netflix Instant. I loved it so much I watched it 3 other times and then it went away. Fortunately I bought a copy (2 actually) on ebay from you guys. Good call on Thomerson, he was PERFECT for that role. And whatever you had to do to make the car stuff happen was WORTH IT. Those are some of the best scenes in the entire film. Great for you, I hope Live Evil takes off somewhat. I never hear anyone talk about it. Such a good flick.


MT: If you watch the stunt promo you will see the camera car crane called the Russian Arm. Its also used in movies like Fast and Furious and Transformers. I worked at the company that rents them during the production so I bought them in. I tell a crazy story about the using a rental car during the first car chase in the commentary. LE was on Netflix for two years but they were quiet honestly too cheap to reup it.

As far as press goes the film appeared in just about every major magazine and online all over the place when it first came out. Fangoria did a full page article on it. TT is very cool in person.


Mr. G: First up Netflix: It's fucking Instant, just keep it on there. All your doing worst case scenario is keeping up space...and looking at a lot of their stuff, that's saying something. Second: I would die to meet Thomerson. I've been a fan for quite a few years. I wish I could've been older to better appreciate his career during the 80s and 90s. I hate discovering it 20 years after its prime.

MT: I totally agree about Netflix. The deal is between the VOD distributor and Netflix. There is not much I can do about it for the next couple of months. If I could I would negotiate my own deal with them. All we can do is have have people request it or save it in the queue.

That's pretty awesome, eh? Who knew stuff like this happened? Well, Mark Terry said it best: Go to your Netflix RIGHT NOW and save Live Evil to your queues. It's the only way it'll get on there. The more demand the greater chance it'll get accepted through Netflix. And hopefully from there it will rule the world!
Posted by Mr. Gable at 7:52 AM