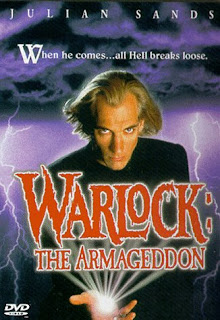 I give a lot of movies a lot of shit here at Mr.GR and a lot of those movies deserve it. Warlock: The Armageddon does not.

Warlock: The Armageddon is one of those sequels that you want to see because you like the original a lot but you keep putting off because your scared of how terrible it will be. Like something about the cover and description drives you away because of how different it’ll be from the original. Maybe it’ll be too serious, maybe they’ll fuck up the Warlock really bad, maybe it’ll be too fucking slow, maybe you saw that Warlock 3 doesn’t star Julian Sands so maybe Warlock 2 was so bad that he quit the whole thing altogether, or maybe your afraid that Warlock 2 will ruin your love for the original Warlock. Such is not the case.

After finishing this movie for the second time last night (I wrote this review like 6 months ago and finally am posting it) I completely take back any possible bad feelings I had with this movie. It’s kind of one of those “FUCK! I’m stupid” moments for even attempting to write this thing off before I had a chance to sit down and watch it. Another lesson learned.

What should have triggered me off to this being a GREAT movie was the director. I really should have done my homework. Anthony Hickox, the mastermind behind Waxwork, Waxwork II: Lost in Time, Hellraiser III: Hell on Earth, AND Full Eclipse (which I just saw recently for the first time as well), is the man behind the camera for Warlock: The Armageddon. What a fool I was. I LOVE THIS GUY! And I think he does a phenomenal job with Warlock: The Armageddon. The camera angles are amazing, his use of zoom in several “slow” scenes make the movie truly stand out. Well done sir.

The special effects! You can’t have a good horror movie without good special effects! And this movie does them nearly perfectly. Thankfully, and to my tremendous appreciation, a majority (and I mean MAJORITY) of the special effects are practical effects. So that means little CGI and lot of gory gory goodness. The birth of the Warlock was nasty…and his kills were equally disturbing. I fucking hate when they ruin a good movie with too many computer effects. This movie only uses the computer effects when the Warlock is playing with the stones (the central focus of this movie). It’s not that it’s bad, it just seems like those scenes were designed for out of date 3D technology. And it could very well have been but I don’t know for sure.

So the story, I should probably get around to that. It starts out with Druids (FUCKING DRUIDS!) preventing the rise of Satan’s son. Julian Sands. Using the power of seven sacred stones they stop the Warlock and put him back to hell. From there we fast forward 600 years or so to present day. The time is right again for the Warlock to return and this time he is successful. Now his mission is to collect the sacred stones so he can open the portal to hell to unleash his father…you know him…Satan! So he travels to America capturing the stones. Because apparently the stones hate the rest of the world. But the beauty of this part of the movie is that with each stone he has to get it from the owner…and the owner has to forfeit the stone willingly. It’s the rules. And this is when the gory gory goodness happens. Absolute fucking genius I tell you! So the Warlock tricks and murders everyone into getting their stones. At which point he has one final stone left…and its in the hands of a couple of Druid punks.

I really enjoyed this aspect of the story. The ACTUAL Druid “monks” or whatever didn’t have the power to combat the Warlock so they had to make their children do it. This made for entertainment because they have all these powers but they’re too stupid to know how to use them right. With great power comes great failure. And it was awesome.

Then the movie comes to a climax, and so do I, and it’s all over. The ending…is pretty predictable. I wouldn’t have it any other way though, it’s not necessary to try and be original here. Not with this movie, I fucking love the way it ended. It’s what I wanted to happen and it happened. Thank you Mr. Hickox.

If you need any other reason to see this movie…there is a splendid cast at work here. There’s Julian Sands of course, the motherfuckin Warlock. He kicked ass in the original and now you get to see his ass in Warlock 2. And he also kicks ass too. Then there’s Steve Kahan…you know him better as Captain Ed Murphy in the Lethal Weapon movies. There’s a short appearance by Charles Hallahan. He was “Spider-Head” in The Thing. There’s a very short cameo by Zach Galligan, which is not surprising seeing how he starred in the Waxwork movies. You probably know him as the lead kid in the Gremlins movies. And then a very special appearance by one of my favorite “Where’s Waldo of the Horror Genre” members…George “Buck” Flower. 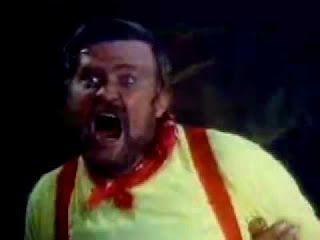 Why am I so awesome!
He’s in TONS of great horror movies…but always has small parts. He has a passion for dying and I love him for it. You really get to see a lot of him in John Carpenter movies. Always dying that man is.

I can’t tell you enough about how much I loved Warlock: The Armageddon. It has excellent pace. Just when you think you’re going to hit a lull in the movie, it picks up again. Timing between scenes is nearly seemless. There’s always enough going on that you can’t possibly lose interest. I’m looking forward to seeing what they did with Warlock 3, I know it won’t be the same without Julian Sands but I guess I need to be open minded, because my closemindedness about Warlock 2 prevented me from seeing one hell of a movie a long time ago.

(Warlock 1 and 3 are on Netflix Instant Watch. The Armageddon is only available through DVD rental. Sad.)
Posted by Mr. Gable at 7:51 AM