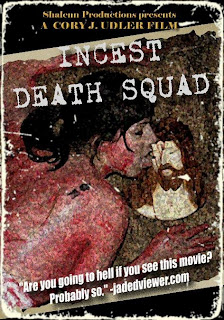 I'm just going to let that sink in a minute.

Oh yeah. This is happening.

That's amazing. There isn't just ONE of these trashy movies, THERE'S TWO! This is gonna be awesome.

Check out this joyous trailer now:


Lloyd Kaufman baby. You know its awesome when that guys involved. And his little rant at the beginning of that trailer is priceless.

After speaking with Cory Udler about his movies, he told me that he'll be sending me a screener copy of them. And let me tell you, if I get those I'm gonna review the SHIT out of them. I'm going to do terrible Incestuous things to those discs. And I'll be sure to write all about it!

But for now, YOU can own these amazing movies! Go to the official website and you'll be redirected from there to buy it and you can also check out other info (like part 2) and pictures.
Posted by Mr. Gable at 7:20 AM