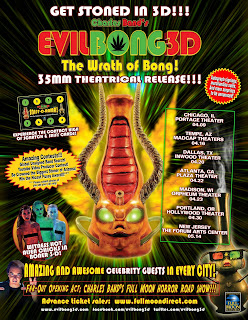 (NOTE: This is review 1 of 2)
The Evil Bong 3D Experience
So let me set the scene for you. Last Saturday we were sitting in Minnesota...and Evil Bong 3D is headed to Wisconsin. 4 hours away...close enough for me. So we packed up some gear (portal DVD player) and some friends and we headed out on our journey of nerdom.

And I'll have you know I sat in the storage area of an SUV for the entire trip (well mostly). That's how dedicated and stupid I am about these movies. (The Gable Way.) 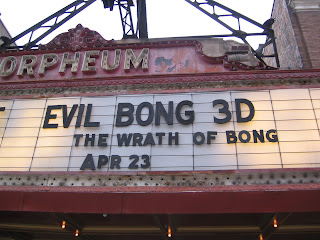 So we get there and we're pretty excited. I mean...EVIL BONG 3D! How can you go wrong? We get there and immediately it is the greatest thing I have ever seen. After receiving my 3D glasses and scratch and sniff card I look down the corridor and see a long row of Full Moon merchandise. Movies, movies, more movies, tshirts, lighters, other amazing stuff, and at the end of it all was the man I've been waiting to see for a very long time. The man that made all of this possible: Charles Band.

I've never ACTUALLY met any celebrity before. I know Band isn't the biggest of celebrities but he is to me. So I'm trying to calm myself so I don't sound like a total douche when I get to see him.

So we walked down the aisle, checked out all the cool stuff that was available, shot the shit with Band's Minions (they know about The Taint hahahahaha) and finally I got to speak to him. And we were all wearing our Bad Movie Night tshirts so immediately we got to talking about awesome movies. 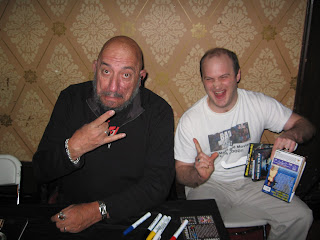 Alcohol Paul has never been so excited to own Galaxy of Terror on Bluray.
Then we were ushered along because more people were piling in and we found our seats for the movie. (Which I will get into tomorrow)

SO....how was it? The Evil Bong EXPERIENCE was amazing! The merchandise, some of it only available on the tour, was really cool. It was great to see some of the boxsets that I've LONG contemplated buying. The Puppet Master trunk was really fucking cool. And all the other shit was great as well.

For me, seeing Charles Band live in person was a dream come true. It's really awesome to meet someone who's career you've followed forever and someone that you talk about ALL the time and he's not a complete asshole. He was actually very cool and excited to be there. It could not have been better. Plus, I've never seen someone so happy to sign a copy of Demonic Toys 2. Holy shit did he get into it. That was awesome. 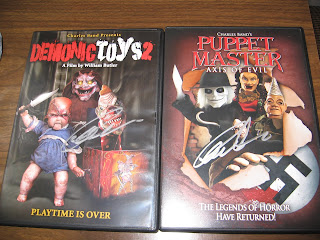 The epicness of these movies just quadzippled.
And now the show itself. Merchandise and celebrities aside...the show itself was pretty cool. Before the movie Charles Band performed a mini-roadshow for everyone. He started out with a long winded story about Ghoulies. IT ALL MAKES SO MUCH SENSE NOW! Weed, it was all about weed. And toilets. (Long story short, they thought up the toilet thing after they shot the movie and that's why there's just a quick scene in the movie.)

After that, he got a few people on stage to act out a scene. There was a monster being electrocuted by his brother over their love for a woman and the monster breaks loose and the only way to calm the beast...was to expose their breasts. AH YEAH, titties live and IN YOUR FACE! And actually...he was able to get THREE ladies to expose themselves. It was amazing. And really funny.

Email ThisBlogThis!Share to TwitterShare to FacebookShare to Pinterest
Labels: Evil Bong 3: The Wrath of Bong