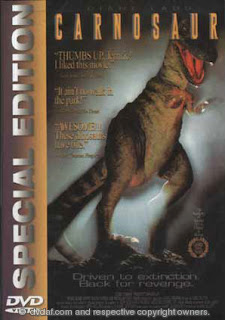 This review comes from Vincent of Vincent's Handmade Art. About a month ago he participated and conquered the Bad Movie Battle Royale. And for his victory I hesitantly gave him the Special Edition of Carnosaur. (which is spectacularly NOT that special) I was pretty wasted when I last watched it (and putting together a model car no less) and my recollections were pretty impaired. But I KNOW Carnosaur 2 is fucking awesome so Carnosaur 1 couldn't be all that bad.

"The first word that comes to mind after watching Carnosaur is, "Ouch!"  That's mostly because we watched it with only 2 of the required 3 essential aids for bad movie viewing.  We had no rum, and I'm not sure Dr. Pepper counts as an energy drink.  So having only half the normal protection we started the show and were optimistic at first when we saw names of actors that we recognized.  There was also another name we recognized in the opening credits and that name was Roger Corman.  So things went downhill from there.  At one point Stacia turned to me and said, "I blame YOU for this!"  The the girl getting her leg eaten (as seen on YouTube) was, in fact, the best part of the movie unless you count Clint Howard getting decapitated.  So, after 70 minutes we were at least comforted by the fact that it would be over soon but, no, not only was the movie horrible but it had a very bleak and depressing ending.  I'm not referring to the fact that the entire population of the world was at significant risk of complete extinction.  I'm also not referring the fact that the government was going around shooting everyone and torching all the evidence.  The part I couldn't handle was the image of the Alfred E. Newman "What me, worry?" poster burning at the end.  I mean WTF!?  Did they think they were making an ironic societal statement or were they just fucking with us?  Or perhaps they were smart enough to be completely whacked out of the minds on the right amount and right number of illegal substances while making this film."

You can trust this review for 3 reasons. First..."I BLAME YOU FOR THIS" was hilarious. 2: He knows who Clint Howard is and appreciates his deaths. And 3: The outrage over the poster burning.

I can agree with this review. What I do remember from Carnosaur is that its actually a pretty serious effort. But I assume that's because they wrote the movie based on a book and then when they actually got around to making the special effects they were like OOPS. We don't have money for anything beyond guys in suits. But fortunately they realized this for the sequel and just gave it hell in part 2.

Carnosaur one is not completely terrible. If you like dinosaurs, watch it. But I'd strongly recommend Part 2. And Part 3. Part 3 can't dispose of expendables fast enough. And you DON'T need to see part 1 to enjoy the other 2. They all stand alone.
Posted by Mr. Gable at 7:45 AM