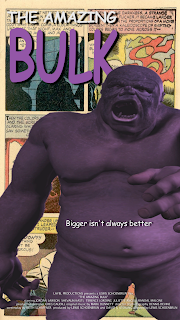 I have just witnessed The Amazing Bulk and its pretty safe to say that I too...have an Amazing Bulk right now.

Wow what an amazing movie...and it was something completely different than what I thought it'd be. If you haven't yet, check out the trailer here and then come back to this review. You'll understand just what the hell it is that I'm talking about.

I was all geared up for a balls out crazy, terrible CGI (on purpose), awful acting, terrible direction, shitfest. And not only did I get all that...but I got so so much more. I figured out in the first 30 seconds just what this movie is ACTUALLY about. You see, the first 30 seconds are rips of various big name production companies. So there's a ripoff Universal logo, Paramount, Fox, etc. Each of them hilarious. And then it dawned on me...perhaps this isn't just a dumb ripoff. Maybe there's some kind of context to it. Maybe...just maybe...this movie is actually a jab in the face of every OTHER comic book movie these days. 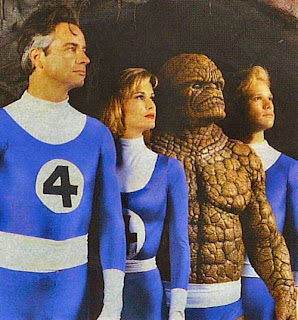 With the exception of Roger Corman's unreleased Fantastic Four of course.
You know what I mean, these 200 billion dollar budget CGI-fests that run around claiming to be amazing. (Which most of them actually are) Maybe this movie is just a social commentary on the state of our films these days. The heart of it all is lost on these kinds of films. Realism is dead. (Real meaning something tangible with the ability to see it and touch it.) This movie just show how RIDICULOUS it all really is when you strip it all down. Just one long fake movie.

Then it turns out that's exactly what it is because I had the opportunity to talk to the director/writer/editor, Lewis Schoenbrun.

Helluva nice guy lemme tell ya. I'm not trying to kiss ass or anything but after he told me that this movie was about spoofing comic book movies then this movie made a little more sense. At first I was all gung ho about the fucking great use of MS Paint...but then that picture became a little clearer for me. And I enjoyed every god damn minute of it.


Lewis, if you're reading this, I didn't upload this video. I just found it on YouTube.
Fuck yeah, did you see that big purple dude! HAHAHAHAHA I LOVE IT! That's how you make a movie friends. And I'm pretty sure that was the bald detective from earlier in the movie painted purple. HAHAHA That's so awesome. I'm telling everybody about this movie! THE WORLD MUST KNOW!

With a running time of around an 1:15, it makes for a lot of fanstaticness in one quick shot. You'd think that the whole green screen thing would get old pretty quickly but it doesn't. The background isn't half bad most of the time. It's just epic when they get in cars and stuff and it looks like it was designed using MS Paint. Dammit all if I didn't cry laughing. Then there's glorious stock footage of rockets exploding all over the world, purple paints hulk fists, and the required amount of black guys in a bad movie: 1. OH MY YES!!

The ending. Oh my the ending. Once you've accepted the whole, "this movie is a spoof of big budget movies" thing...the ending makes complete sense. But if you're just watching it for the sake of watching it, then you'd swear that you're high.

If I had to be critical of anything...and I hate to be critical (what kind of reviewer would I be if I wasn't?), I would have shortened the whole blowing up of things with the rockets. It's like a solid 5 minutes of stock footage of rockets launching and flying...then the whole scene with the rockets that seemed to be dancing to the music. That was funny...just too long.

Also, I would definitely definitely add a Wilhelm Scream in there. Personally, I think when that dude is crushed by the boulder in the castle. A Wilhelm Scream right there would have made this movie all that much more memorable. You just can't beat a well placed Wilhelm Scream.

And where's the post credit scene? All comic book movies have something for the nerds to geek out over. Perhaps the bad guy lives...or a foreshadowing of another badass superhero. Perhaps a female spider-man?

All in all, this is worth it folks. Its not available on DVD and I have no idea when it will but I'll be sure to let you know when it is. Currently, this movie is looking for distribution. So if you're in that kind of business and are looking to make some money with this movie get in contact with Lewis Schoenbrun and buy his movie. It's AWESOME. And I'm sure for the rest of you if you need to see this as bad as I did and you contact Mr. Schoenbrun, he'd be more than happy to sell you a copy. Actually, you SHOULD contact him and buy many copies of this movie from him. Just so I can get a sequel. 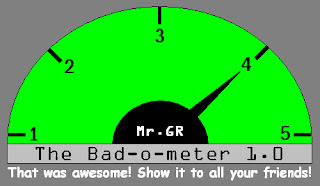 And now, for the dozens in attendance...LET'S GET READY TO RUMBLE!!! 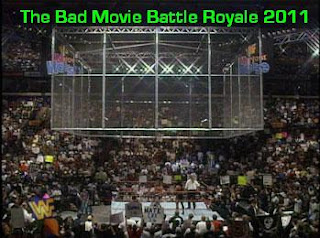 Allow me to explain the Bad Movie Battle Royale for those of you that missed my post from the other day or are reading this review many months down the road. I am pitting 10 movies against one another in a death match of doom! This is the first of the ten. Each time I watch one of them I will create a wrestling character from the Nintendo 64 game: WWF No Mercy that coincides with the film. Enter: The Amazing Bulk 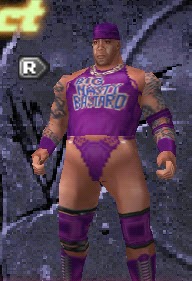 Yep, that shirt says Big Nasty Bastard. And that's a thong. XD
Strength: 10 (He's big, he's huge. He will KILL YOU)
Speed: 1 (He's big, he's huge. He's slow as fuck)
Endurance: 10 (I'm certain he can take a beating)
Agility: 3 (He's built like a brick shithouse folks, that's his strength and his weakness. Not very agile)
Offensive: 5 (I say 5 because he's slow to attack so he's open to attack but when he connects, it's brutal)
Defense: 5 (I'd say more but he just ran away most times)
Recovery: 8 (Big purple dude comes back fast)
Bleeding: 3 (I would give him a 1 but he clearly bled during the opening scene of the movie so I say 3)

That's kind of a let down. I thought he'd have done better than that. But the bigger they are, the harder they fall. I still have faith in the big purple dude. Ain't nothin can stop the Atomic Smash! 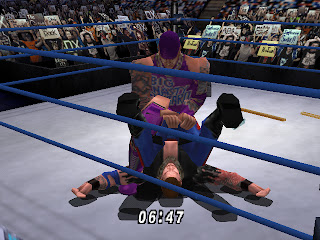 Email ThisBlogThis!Share to TwitterShare to FacebookShare to Pinterest
Labels: The Amazing Bulk