Mr. Gable's: Twas the Night Before Christmas (Merry Christmas Everyone!!!) 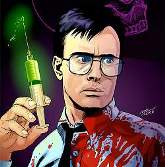 I just want to take this time to wish all of my readers a Merry Christmas! Please be safe and I hope you get all the crap you don't need on your list. I know I am!


The Greatest Christmas Movie of All Time: Santa's Slay.
And I also want to let everyone know that I'm going to take next week off from blogging. Just a short vacation from everything to end out the year. It's been an amazing time meeting all of you and shooting the shit about everything. I can't wait until 2011. It's going to be an amazing year, let me tell you. I have some pretty crazy plans and I hope you'll all be here to join me. Some ideas include...Better Reviews (with some kind of badometer), All Day Leprechaun Marathon (for St. Patty's Day), All Day Puppet Master marathon (if I don't go insane), a Bad Movie Battle Royal, and of course another 31 Baddest Days of Halloween. (To be determined)


To end out the year and to celebrate the Holiday Season I present to you this poem...


Mr. Gable's: Twas the Night Before Christmas
‘Twas the night before Christmas, and all through the basement
Mr. Gable was drunk and watching something demented
The stockings were hung by the TV with care,
In hopes that bad movies soon would be there.

The wife was asleep, passed out on Jim Beam
While images of topless chicks danced on the screen.
I slammed down the rum, let out a hiss,
Rose to my feet, I needed to piss!

When out on the lawn there arose such a clatter,
I grabbed my (sawed off double barreled) Remington to see what was the matter.
Away to the front lawn I stumbled real slow,
And pumped two rounds into the fresh fallen snow.

I stumbled and grumbled, no clue where I was,
I sure could use the help of Chuck Norris.
When, what to my blurred vision should appear,
But a miniature sleigh, and eight tiny men with beards.

I fed two more rounds into the cold chamber
I missed the sleigh and hit my Ford Ranger.
That fat old man, so lively and quick,
He’s trying to escape! That guy that looks like St. Nick.

“Now, Campbell! Now, Statham! Now, Lundgren and Austin!
On Arnold! On Willis! On Stallone and Rutger Hauer!
To the top of the porch! To the top of the wall!
We’ll teach that asshole not to fuck with us all!”

They hurried off the roof and jumped to my sides,
Surrounding me tightly, I relieved myself and sighed.
They laughed and howled, pointed and smiled.
I knelt to the ground and cried like a child.

My fear subsided and courage swelled within me.
This happens all the time in the movies.
I stood up proud, whipped out my gun,
“Come now motherfuckers! Let’s have some fun!”

I wasted the first three with one shotgun shell
Then Bruce Campbell attacked with his chin from hell.
I fell backwards, dazed, confused, and sick.
An obvious distraction, for a roundhouse kick.

I knocked them all out, I was the victor
Except Santa Claus and his last actor.
It was Arnold the Great, my only idol.
I was bound to kill him, choppas and all.

I activated my shoulder mounted laser.
Then he attacked me with his Star Trek phaser.
I laughed till I cried, However crude.
Never in my life had my dreams come true.

Arnold loved my laugh and sided with me.
We vowed to kill Old Claus, by golly.
Santa was quick and light as a feather.
But Arnold and I were worse than the weather.

We beat him and bruised him, cut up his face.
He escaped our clutches with a red can of mace.
Good Old St. Nick jumped in his sleigh
Powered by Dilithium and not by hay.

But I heard him exclaim, ere he drove out of sight,
“Fuck you Gable! I’ll come back later tonight!
My army is many, I have a ton
With the likes of Jet Li and Charles Bronson!”

I looked to the sky and shouted with glee,

“Come get some Santa! You can’t fuck with me!”

And that’s when I woke up on the couch in the basement to the end credits of Battle Queen 2020. That movie will fuck with your mind.


MERRY CHRISTMAS EVERYONE!!
Posted by Mr. Gable at 1:42 PM