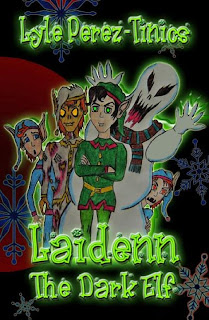 Laidenn The Dark Elf is a story of unimaginable proportions. You see, Santa has a little more up his sleeve then just plain old Christmas magic and the North Pole has a lot more to offer than just candy canes and Christmas presents. Just what the fuck am I talking about? Laidenn. The Dark Elf. That’s what.

In this story, there are two kinds of magic, the light and the dark. There are only a select few skilled and trained enough to harness the power of the dark (side) magic. Enter: Laidenn: The Dark Elf. He’s one B.A.M.F. Not only does he know the power of dark magic but he uses it. Frequently. To battle vampire elves. AND vampire snowmen.

The North Pole is nothing like you’ve read in your stories and seen in your movies. This is a terrible place. And only Santa and Laidenn are aware of it. There is a place where evil lives in the North Pole and all hell is about to break loose THIS Christmas. The evil vampire snowmen attack Santa’s workshop and it’s up to Laidenn to set everything right.

“The pitchforks were placed by the chimney with care, in hopes that no vamp elves would appear there!” (I just made that up! Pretty awesome, huh?)

This is a children’s book.

Not kidding. This book is written and targeted for the young horror reader. New Bloods. So if you have a niece or nephew that LOVES horror movies then you need to get them this book. It’s right up their alley.

The way its written is perfect too. My feeble brain was able to follow it and comprehend it so I think any young reader would as well. The author, Lyle Perez-Tinics, does a pretty good job of keeping the writing….I don’t want to say this but it’s all I can think of right now…dumbed down. (That sounds terrible…it’s really a good thing). This keeps the action and the “scenes” moving quickly so any young reader reading this won’t be able to stop. Honestly, when I was a kid I fucking hated reading. It was like punishment. So in reality this book is perfect for kids who were like me, just dreaded reading. It’ll go quickly for them and there’s enough going on at any given point that they couldn’t possibly get bored.

The story itself is pretty awesome. Lots of magic and killing. But most of it (like 90%) isn’t very gory. Instead of blood there’s red snow, etc. But there’s some decapitations and eating of the flesh. Oh right, there’s zombie elves in this story too. Forgot about that. And it makes for a pretty interesting battle in the end.

If I had to knock anything, I’d have to say that the ending felt a bit rushed. I don’t hate the ending, I actually really enjoyed the way that it ended BUT it just read like how I tend to write things. I get to a point where I just HAVE to finish the damn story so I just push it out as fast as I can and it ends up being kinda crappy. This is kinda like that, a tad rushed, not awful, but it could have been handled a little slower. But that’s me.

So in short, support your local independent writers and check out this book. It’ll make a great Christmas present for your sons, daughters, nieces, nephews, or that kid down the street! You can find it here or you can look up Lyle at his website or on his facebook page. He’s got a few other projects going on including a free zombie book and his anthology book “The Undead That Saved Christmas.” Which I’m sure you’ve already bought by now. Riiiggghhhttt???

And look for Laidenn: The Dark Elf 2 and The Undead That Saved Christmas Vol. 2 & TUTSC: Vampire edition (submissions are open now!) next year.
Posted by Mr. Gable at 7:21 AM