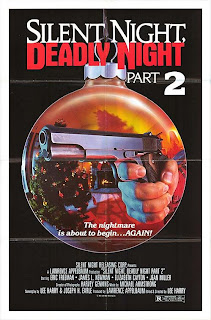 
GARBAGE DAY!!! hahahahaha That scene is worth EVERYTHING!

SNDN Pt 2 is a masterpiece(ofshit) of filmmaking. It was filmed in 10 days and thrown together haphazardly to form something that has a "Part 2" added on so that they could make some bank from the "success" of the first one. I don't know how successful the original was but there was a shitload of media from it as it was protested against and banned all over the world. So obviously, with something that awesome there needs to be a Part 2 right?


So enter SNDN: Part 2. That tagline isn't lying...The Nightmare is About to Begin...AGAIN! It's true, it happens all over again. ALMOST EXACTLY. Ricky...the younger brother of Billy, the guy that was the killer santa in the first movie...is in an institution. This is where the majority of the "plot" takes place. 90% of the movie is Ricky telling the doctor about his life...starting with all the events that took place in part 1. So we flashback...and flashback...and flashback some more for FORTY MINUTES. Honestly...don't even bother watching part 1, just watch part 2 because you'll get THAT movie and THIS movie all in the same movie.


Then the NEXT forty minutes is some NEW flashbacks. Back when Ricky was growin up and bangin hot chicks. And stabbing guys with umbrellas. Well they wind up going to see THE FIRST SILENT NIGHT, DEADLY NIGHT IN THE MOVIE THEATRE. And this forces Ricky to snap and go on a rampage. That part is pretty sweet, cuz it leads to this:


Then finally Ricky escapes the mental institution to seek out Mother Superior...and PUNISH her. And for some reason that the movie vaguely touches upon...she has face herpes. Well Ricky gets there, punishes her, and the movie is thankfully over. All is well with Christmas again. Or is it?

God this movie was awful. But its incredibly watchable. Somehow, it is. The flashbacks get tedious and worn out pretty quickly but just when you have had enough of them...new flashbacks happen. And then when you get tired of those flashbacks...Real time kicks in. So somehow the movie paces itself well enough that you can actually fucking sit through it.

I'd recommend this to everyone. It's a classic holiday bad movie. There really isn't anything here you can't love. GARBAGE DAY!