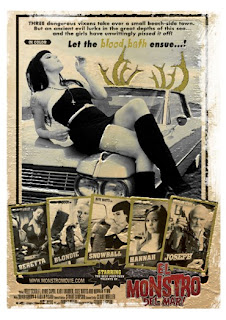 Alright! Another 70's throwback exploitation monster movie! WWOOOO!! AND IT'S FROM AUSTRALIA!!!

Maybe it isn't a throwback, maybe the 70's have finally made their way into Australia. (Just kidding Australia)

This looks to be a pretty cool exploitation flick that turns into a monster movie. I'm getting a "From Dusk Til Dawn" kind of vibe going on here. Check out the trailer, you'll see what I mean:

See? It kind of feels like these bitches show up in this fishing town, murdering people along the way. Then they settle in and some horrible creatures show up and someone comes out with a pulsating wooden stake. Presumably to stab those tentacle things right in the heart. Or maybe those are fisherman penises, cuz those chicks have probably never seen them before. (god I'm tired, I'm making really stupid jokes)


Three gorgeous but deadly hired killers, Beretta, Blondie and Snowball, hole up in a small beachside community to keep a low profile. But this town has a dark secret. The local old sea baron, Joseph, tries desperately to warn them to never go into the water. But these crazy vixens listen to no one, especially no crazy assed old fool.  So the Kraken awakes! Now, along with Joseph and his beautiful grand daughter, Hannah, they must fight for their lives against this furious creature of the deep as the sea rises in a tidalwave of blood.

Holy shit, that things the Kraken! Sweet! Oh wait, doesn't a Kraken live in the water? So can't they just get in a car and drive away? But that's really no fun so I suppose they'd just stay and shoot at it until it died or left out of boredom.

But in all seriousness this looks like a fairly decent flick. The homepage of their website is full of awards they've been receiving so that makes me feel a lot better about seeing this movie. Not that I would never watch it but you know, it makes this movie a higher priority over say...The Hills Run Red. Which I still want to see btw.

It would appear that Del Mar is currently on tour around the world going to various film festivals and getting all kinds of awards. So I would wait patiently for this to either come to your city or I'm sure a DVD release will happen shortly. I'm hoping for a direct to Netflix Instant Watch myself. Cuz that would boost it even HIGHER on my priority list. Either way, I'll let you know!