Tiffany Shepis (That queen that screams) is She Wolf Rising + BONUS! 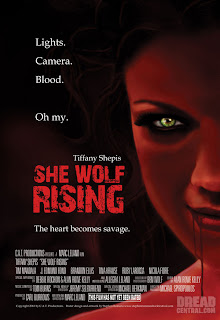 Tiffany Shepis. Have you heard of her? It's possible. She is one hot piece of....I mean she is one of horror's beloved Scream Queens. Star of Zombies! Zombies! Zombies!, Delta Delta Die!, Dorm of the Dead, and Bonnie & Clyde vs Dracula....Tiffany Shepis is no stranger to some of the greatest (ok...not all that great, but she's great) bad movie horror in the last 10 years. If you check out her IMDb profile you'll see that she got her start doing a lot of films out of Troma. And if you don't know who Troma is, please watch The Toxic Avenger RIGHT NOW! Troma makes a ton of absurd out of this world FUCKING AMAZING movies. All of them full of completely unnecessary amounts of blood, gore, boobs, swearing, and frontal male nudity.

Ah fuck, now you have penis on the brain. Quick look at this! 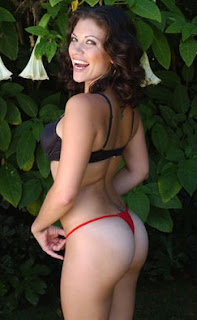 Oh Tiffany, your booty makes everything better.
Alright, with that out of the way. Let's get back to what I should be talking about...She Wolf Rising. Tiffany's new movie. Before I get into anything, check out the trailer.

Alright, that looks cool right? Fucking Babes and Blood. Monsters and Murder. This movie looks to have all the greatest things that a low budget independent horror movie needs in order to draw an audience. Now check out the synopsis pulled right from the website:


She Wolf Rising is a supernatural nonstop thriller that explores the dark side of underground filmmaking. Gina Sklar, the reigning queen of horror, portrayed by Tiffany Shepis, lures Jake Bubar (Tim Mandala) into the decadent world of illusions and myths. Robert Lonzo (J. Edmund Fond) is Gina’s mentor and producer in the world of horror cinema. Someone has stolen the footage from his latest movie and Gina needs Jake’s help to recover it. This is Lonzo’s best movie ever and Gina’s breakout performance. Gina believes that this movie could catapult her out of the “B” world of films and into mainstream cinema. Jake struggles with his own demons internally but in the end cannot resist her. He only sees her vulnerability and beauty and will do anything to help. Jake’s beliefs are challenged when he discovers Gina’s true nature and realizes that the “the heart becomes savage.”  Together they forge ahead and deal with the demons and beasts that try to stop them from their forbidden desire.

Oh wow. THAT'S what this movie is about? Is there even any fucking werewolves? Or tits? That description tells me this is going to be an amazing movie and you know why? If this synopsis was written by the director of this movie then we are in for one hell of an amazing bad movie. This guy actually thinks he's making some kind of deep and metaphorical film incorporating elements of horror and monsters but we all know this guy has no fucking clue what's going on. That synopsis reads like I wrote it. Like if I were to do a project and take it absolutely as serious as I can...it would be a truly mind boggling spectacle to see. Seriously...from the trailer this movie doesn't need a plot just a lot of bitches getting ripped apart. But the fact that they're taking this as serious as possible and trying to add meaning to this movie tells me this thing is going to be as great as Troll 2. Yes, the movie that was directed by a man that actually thought he was making a deep societal movie about vegetarianism. I can't fucking wait for She Wolf Rising to come out. It will be amazing.

As I end this post I would like to say this. I mean no disrespect to this movie or its actors. I really truly am pumped to see it. I will absolutely, 100%, support any independent...anything. But that's the vibe I'm getting from this whole deal...and I got to call it when I see it. Let me know what you think.

No news on a DVD release date.

ALSO....as I was researching Tiffany Shepis I came across one of the most amazing films I have ever seen. Come back to Mr. Gable's Reality THIS FRIDAY to see this amazing film IN IT'S ENTIRETY. You will not be disappointed. I promise. (I hope.)
Posted by Mr. Gable at 7:46 AM