NEW Parasitic Trailer: Could it be REAL effects I'm seeing? 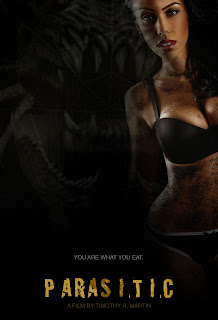 Well then...I'm going to be jerkin it to that poster later. I love how the letters on the title are scared to be next to one another. Those "I"s man, watch out, they got the AIDS or something.

On to Parasitic. I've had this trailer sitting open on my browser since last week sometime and I just didn't have anytime to blog about it. Well now I do, and it also seems that the rest of the internet is becoming aware of its existence today as well. Wow, I was one up on the internet about something. That's awesome!


After a strange meteor destroys a communications satellite and crashes into Tampa Bay, a sickly looking fish finds itself the meal of a beautiful nightclub bartender named Val. Moments later, as the bar is closed and locked tight, the infected Val becomes ill and all Hell breaks loose. Hidden from the others, the parasite she has unknowingly eaten rapidly grows, bursting from her throat and becoming the puppet master for the chaos ahead. With no possible way to reach help or escape, the trapped club-goers must fight to survive and plan to destroy the creature before it is let loose into the world.

This is going to be great! I love how the synopsis so conveniently points out major plot points. The meteor crashes into a satellite...the only satellite capable of communications...and now the club-goers have no way to reach help. I love it!

In all seriousness, this is going to be awesome. I don't care about the little details like communications and satellites, we want boobs and blood right? Well I'll let you know that this movie delivers. At least on the blood part from what I've seen. I am really excited for this movie because at least from what I've seen in the trailer...there is little CGI effects in this thing. Except for the space parts but who gives a fuck about that anyway. When some parasites burst out of a chicks neck I want that shit to look real, not some computer generated piece of shit. And what makes it better is that the director, Tim Martin, is a special effects guy! So you can be rest assured that this will probably be the goriest thing you've seen all year. I can't wait.

Email ThisBlogThis!Share to TwitterShare to FacebookShare to Pinterest
Labels: Parasitic