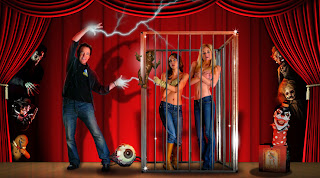 
The 31 Greatest Bad Movies Charles Band Has Ever Produced #5 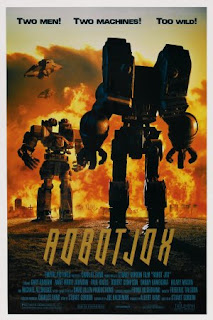 Destination: The future. It is post-nuclear apocalypse. Everyone including Jeffrey Combs is forced to wear those shitty dust masks so they don't die. Continents are still at war with one another. Attempting to learn from the mistakes of the past, they forget war and nuclear missles to settle disputes, instead they settle for one unanimously awesome solution: Giant Robot Fighting.

This fucking movie RULES! I'm serious...Robot Jox is exactly that...giant robots that fight each other to settle territorial disputes between nations. Specifically the land of Alaska is fought over between the Russians and the Americans. We just watched this movie last weekend and I gotta say...it was just as awesome as it was the first time I saw it. And the second time. And the third time when I was blitzed out of my mind on Rum. And there was probably a fourth time that same night...plus last weekend with my friends...but really...who's counting? (Answer: Me)

I'll warn you...it starts out strong...then it tries to develop a story. We don't want it to, but it happens. So there's a severe lack of robot fighting during that middle hour. It's still good old fashioned B movie gold! But there just isn't any robot fighting. But the beginning and end are chock full of giant robot ass whooping. Like a live action Mech-Warrior. So in the end its worth it. 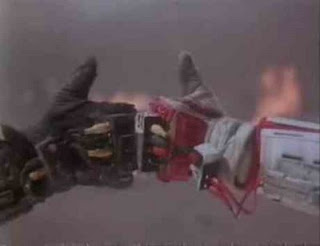 Everybody wins with Robot Jox.
And in case you were wondering...this is yet ANOTHER Stuart Gordon film on this list. I love Stuart Gordon and I love that he is friends with Charles Band. Their projects together are simply amazing. But it also happens that this movie...at least from what I can recall from my rum soaked brain...put Band's Empire Pictures out of business. I'd assume because it was just so epically awesome...but more realistically because it cost too damn much. But nevertheless, it happened, it saw the light of day, and it was worth it. Not to mention that Band took the idea and ran with it...making 2 semi-sequels out of Full Moon...Crash & Burn and Robot Wars. Both pretty awesome in their own way. But Robot Jox is a Stuart Gordon movie...and he did Re-Animator...and there's a cameo from Jeffrey Combs in this movie...and he IS the Re-Animator...so that makes this movie far superior.

And it has this epic line! (Which someone found it necessary to repeat incessantly for 2 minutes straight. But I gotta say...I can't disagree with their train of thought here.)

God dammit. I might have to watch Robot Jox again. That's just too awesome to be watched ONLY 5 times.

If you liked this movie then check out: Robot Wars
Posted by Mr. Gable at 7:37 AM