Sad day...my computer is having a few...issues...so I'm forced to use Mrs. Gable's computer to write up today's post. Bless that woman, always pulling me out of my bad luck. But fortunately, the Big Blue Bowl of Destiny had pity on me: 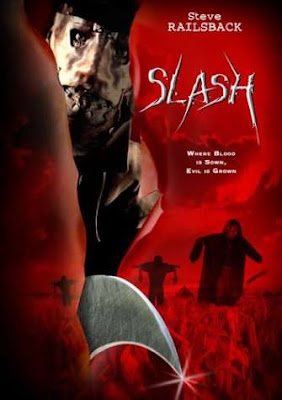 "Rock Band meets Rednecks and a supernatural Scarecrow is on the loose. That black guy is screwed."
I picked this movie for obvious reasons: Look at that poster. This movie is going to obviously blow.

This movie starts out strong with a man on fire. Then it goes forward in time a ways, then a sexy couple bites the dust. And then we are introduced to a Rock Band called Slash. (One of the female members was in the tv show LOST) The lead singer's aunt dies so they have to go out to the old family farm.

This movie is a good old fashioned slasher flick. Bunch o' city folks end up in the country and there's a crazy killer on the loose picking them off one at a time.

This movie has its ups and downs but for a new age slasher movie its pretty good. At least ALL of the characters aren't annoying. There's a huge lull in the middle as the progress with the story. I wish this movie had known that nobody cares about story, we just want everyone dead. There really should have been more kills. But whatever, the story is a pretty interesting one so its not a bad lull. It has to do with spreading blood over the crops.

BUT, you add in some twists and turns that you don't see coming, some pretty decent acting, cool kills, and a killer that looks fucking awesome and THREE PEOPLE ON FIRE and you've got yourself a goooooooooooood time.


It's a good October movie. Available on Netflix Instant.

FFFFFUUUUUUUU
Posted by Mr. Gable at 7:07 AM

Email ThisBlogThis!Share to TwitterShare to FacebookShare to Pinterest
Labels: Slash, The 31 Baddest Days of Halloween